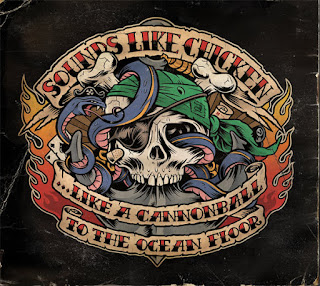 The title and cover of Sounds Like Chicken’s one and only full-length recording brings to mind an album filled to the brim with blood and cutlasses, loot and scurvy. In fact, beyond the titles and a few tracks, the pirate theme turns out to be more of a jumping-off point than a full-blown concept, which works better. A seven-piece ska band from Melbourne, SLC did a decent job of capturing the energy of their live shows on this release. ‘Walk Ye The Plank’ kicks things off right, a lurching beast of a tune punctuated by a barking chorus of ‘Hey! Ho!’, which, even though it’s been used dozens of times, doesn’t seem tired here. From there, the album stumbles a little - ‘The Battle of Stentorian’ aspires to be epic, but isn’t entirely convincing. But then ‘Global Domination’ saunters in with its tight rhythms, rumbling vocals and loud guitar, and the SLC banner again flies high. ‘A battle cry from the rebel elite’ may sound like something of an oxymoron, but its sentiment is perfect for a bunch of rowdy young males. ‘Entrails’ takes aim at B-grade actors and watchers of current affairs programs, both of which, in terms of being objects of denigration, are only slightly harder targets than Michael Jackson. ‘Scourge of the Black Spot’, an intentionally shanty-like tune, is one of several tracks that revolves around dodgy in-jokes, in this case the mythical Captain Borange (guess what that rhymes with). Nevertheless, these bits of nonsense do add a bit of colour and range to the album: a good example is the hapless student asking for ‘Piano Lessons’, which leads into the building groove and eventual outburst of ‘The Awakening Pt 2’. The instrumental ‘The Payoff’ initially seems like a breather amidst all the blood and butchery, but turns out to be the best track of the lot. It combines a chilled-out rhythm with a ripping saxophone solo, moving beyond the borders of ska into the realms of reggae and jazz. ‘Spilt Beers and Drunken Tears’ rolls in like the fag-end of a drunken night that’s devolved into crap but which you still wouldn’t trade away. The slightly rough, unbroken chorus is a highlight. ‘The Ballad of William Stout’ is another slice of gibberish, while the closer, ‘Take A Bullet To The Grave’, ends the album on a suitably furious note. Like the rotting skull on its cover, ‘Like A Cannonball…’ almost seems like the id set loose, but it’s generally reined in before the throat’s bled dry. All in all, it’s a fun package – as goofy as the band’s moniker, and as sharp as the knife of the filthiest brigand.
Posted by Troy Wheatley at 10:10 AM 3 comments:

Meg sits knitting, anxiously slipping off the stitches, through the height of the afternoon. The cool sea breeze enters the room and lightly disturbs the smooth flaps of her cotton dress. A sign of strong seafaring weather, says her aunt wistfully, sewing with her three attractive cousins (less wistful than capricious and haughty) at the long wooden bench. Hopefully it means a fine homeward gale for our own distant sailors. Meg gives her a smile. Like the wily warrior, he would one day return. But for now there is a huge school order to fill, and she doesn’t know if it will be finished by the following Monday. The needle guides her tingling hand, over and under, and along the tossing threads of blue wool, forming a pattern that loops, that shimmers…
Waves lap, under the ache of the caustic sun. Then the rummy haze and the stars like moss-covered silver. To follow the crack of gunfire and to bathe in a pool of blood and salt, and after all is done, will he return to port with them, perched upon the spar, or will they skin his worthless bones? He is resting in the cabin, below deck, when John Black bursts in to tell him that a coastal town has been sighted to the west. His only reply is to look at the wall, to the east. The mate, in jest, punches him on the shoulder, ‘Cairn’t ye show yuir face for once, ye Ol’ Grey Dog?’ They call him that though he is neither old nor grey. Eventually, Black leaves and he returns again to dividing up the loot. Then, having completed his task, he lies down, curled upon his hammock, and closes his blistered eyelids. He does not lie down on shore again for forty more years.

She spies him at the base of the pier, hunched over, smelling the mackerel.
‘Beautiful morning, isn’t it?’ she calls to him.
He looks up, and takes the hook out from between his teeth. ‘Why Meg, m’lady, it’s abs’lootly balmy. Lord don’ make it better for me, nay?’
The net hangs loosely over the bow. ‘You’re a fisherman now, then?’
‘Bin cast by dis here ocean too darn’d long. Nee’d to set down, ye kno’. Nee’d to claim it f’me own.’ She looks into his old grey eyes. ‘So howz ye’ve bin, Meg?’
‘Business is well. My niece is running most of the day-to-day stuff now.’
‘Goo’. Goo’. Tha’s be cheery news.’ He walks halfway across the pier, and then turns around.
‘Come inside, m’lady, m’dame, m’maharanee.’

At ten-thirty sharp each day, he mops the cedar-wood floor and scrubs off the salt that seeps from the chimney bricks. He shaves the carp, and wraps them in blankets. Always the fisherman, he wears his waterproof coat and galoshes indoors as he potters around the cupboards making coffee for her, Chinese tea for himself. He coughs up saliva constantly. He lights three candles, and places them all in the centre of the round table at which she sits. Then he sits down opposite her, and rubs his grey beard red, twisting and twirling the long thick hairs with his fingers, and all the while he is saying,

An albatross, Ishmael’s bane, flies boldly out to sea. I leave him, and walk barefoot across the waterlogged sand. Even now, the sky and ocean meet in a calm turquoise. But what is this thing that lures men away, following the strip of red-gold, and brings them back as cloaked beggars?
There is a memory that I did not tell him about, that I do not have. I stand outside each night, wrapped in my blue woollen cardigan, and trace a crooked path from my waist up to my chin. When I look up, I see him floating into shore, nestled lightly on a sailboat hewn from a falling star. I walk out to him, and he smothers me, in pearls, in spices, before finally, drenched in essence, we drift together until daylight comes. Drift until the moment I turn over to find him gone, departed, a glint upon the waves.
Posted by Troy Wheatley at 9:35 PM 4 comments: