The "John Doe" Posts No.6 - Wrath: Why I Am The Only Person Who Should Travel on Melbourne's Tram System

1) When you quickly ‘nip out’ in front of a great big moving tram that is five metres away from flattening you, you do not look inconspicuous, you do in fact look like a frightened bird about to get smashed by a bulldozer.

2) To all the people crowded (in this context, six or more is a crowd) around the door when the rest of the standing room is empty – the people in the seats don’t bite.

3) To the loud-mouthed man trying to squeeze on to the step of a crowded tram, shouting ‘Could people please move down the tram?’ – you may be in the right (see point 2), but you are still an arrogant tool.

4) It may be petty, but there is a small sense of satisfaction to be had when the person behind sharply says ‘Excuse me’, only to realise a second later their command was completely superfluous because you (and twenty others) are getting out at the same stop as them.

5) If there are only five people on a tram, why is there a need for a stranger to sit next to me? Are they lonely? Do they need comfort?

6) Perhaps I have my headphones in so I don’t have to listen to you – did you ever think of that?!

7) Why do so few people know the Golden Rule of tram-catching? If you have a) been waiting five minutes or more for a tram and b) two come at once and c) they are both going past your destination and d) it is a time of day when people tend to catch the tram, then you should always, always catch the second one. The first one is likely to have people sitting on each other’s shoulders, while you’ll be able to swing a set of shopping bags around the second one. (On second thought: maybe this should be kept a secret…)
Posted by Troy Wheatley at 2:13 PM 1 comment:

The "John Doe" Posts No. 5 - Gluttony: The Melbournian Beer Hierarchy

Group One: Beers that can not be surpassed

1. Obscure beer drunk in small bar overseas that no-one can ever prove/disprove what it tastes like

2. Beers from Victorian microbreweries (preferably close to your home, so that you can claim local knowledge) – e.g. Mountain Goat, Grand Ridge, 3 Ravens
3. Imported beers that nobody else at your table has seen before tonight
4. Beers from interstate microbreweries (preferably regional), and lesser known Matilda Bay beers – e.g. Bohemian, Dogbolter

Group Five: Drink at the peril of your beer-swilling credibility

Another Secret To Winning Your Football Tipping Competition

However, when I was telling someone else this theory, they added a wrinkle that I found interesting. This person said that your chances of winning may be improved by not being too rational or informed. Their argument was (or at least how I have subsequently interpreted it) that a person who thinks about it too much would tend to pick closer to the consensus, whereas actually winning the competition involves a degree of risk-taking, either through a small lack of knowledge or some other reason.

I suppose that a degree of risk-taking is needed to actually win was implicit in my argument (otherwise how do you differentiate yourself from everybody else), but I had not thought about it in exactly this way. Anyway, if it seems that the winner of your tipping competition is often a person with an OK, but slightly tenuous, knowledge of football, this may well be the reason.
Posted by Troy Wheatley at 11:09 AM No comments:

The "John Doe" Posts No. 4 - Sloth: The Philosophers’ Guide to Ways in Which To Prioritize Your Life

The Epicurean Way: Do those things which bring you most pleasure.

The Stoic Way: Do those things which need to be done and suck it up.

The Cartesian Way: Do those things which can not be thought or imagined away.

The Machiavellian Way: Do over others before they do over you.

The Nietzschean Way: Do whatever the hell you want to.

The Augustinian Way: Do whatever the hell you want to, but God is right to punish you for it.

The Hobbesian Way: Do whatever the hell you want to, but your leader is right to punish you for it.

The Existentialist Way: Do whatever the hell you want to, but it doesn’t mean anything.

The Zen Way: Do and not do - it’s not about the doing at all.

The Taoist Way: The Way is neither doing or not doing.

The Heideggerian Way: Who is doing what now?

The Postmodernist Way: Doing is so last millennium.

The Skeptics’ Way: Find a reason not to do anything.
Posted by Troy Wheatley at 4:00 PM No comments: 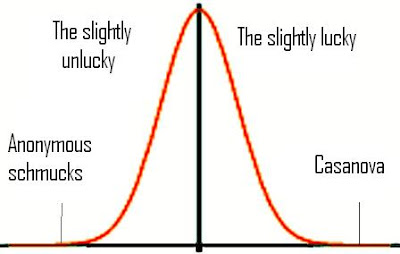 In Nassem Nicholas Taleb’s ‘The Black Swan’, in a chapter called ‘Giacomo Casanova’s Unfailing Luck’, he points out the inevitable narrative bias in the stories that we read. Taleb relates how ‘Casanova felt that every time he got into difficulties, his lucky star… would pull him out of trouble’. But Casanova’s luck, it is argued, should not necessarily be seen as evidence that destiny favoured him above all others. Rather, out of all the ‘risk-takers’ in history who got themselves into scrape after scrape, there is going to be someone (or a few someones) that will pretty much always get out of them. And the stories we read will be written by these winners (the losers may well not live to tell their tales), who will attribute their success to their cunning, their charm, or their outlook on life, and pretty much anything besides their dumb luck in being one of the fortunate survivors.

Another example that Taleb gives are the books written by self-made millionaires providing tips and insights into how they made their dough. They will talk about what happened to them, and then make the generalisation that, if others only follow the same steps, they will get the same result. What they don’t see is that many other people with similar attributes did not turn out to have the same extraordinary level of success (while some were even miserable failures), because very few people want to read about those who did not succeed.

This line of reasoning potentially provides some consolation as to why you may be an excellent writer, musician, or stock market speculator and still, no matter how hard you try, not have the world at your feet. Or does it? The problem is that what Taleb calls the ‘narrative fallacy’ is so widespread that you will have a hard time convincing those smug, successful stock market speculators (or conversely, those who were abject failures) that their position in life is due in large part to blind luck. No doubt many of them will say you are making excuses for your lack of similar success. And they may well be right to an extent, but not as right as they think. In that case, if you want to wipe the smile off their face, perhaps the best you can do is hope that their dose of bad luck is just around the corner.
Posted by Troy Wheatley at 3:48 PM No comments: