My AFL Power Rankings have been a main feature of this blog for the past six years. Next week the AFL starts its women’s competition for its much-anticipated first season. Does this mean I will put together Power Rankings for the women’s league as well?

Indeed I will. But I’m going to give my rankings formula a couple of tweaks for AFL Women’s. To recap: in my system the ranking points for each club is equal to the sum, over its past 22 matches, of its net margin in each match adjusted for both home ground advantage and the strength of the opposition. In addition more recent matches receive higher weightings.

Here are the changes I am going to make.

The number of matches

For the men’s league I chose to use the past 22 matches as that is how many matches a club plays in a home-and-away (regular) season. In the women’s league, with only eight clubs, that would be over three regular seasons worth of matches. So I am going to change the rankings formula for the AFL Women’s competition to cover just each club’s past seven matches.

Note that this, all other things equal, will make the rankings more variable than the men’s competition. A club’s most recent match will count for 25% of its total ranking points, compared with 8.7% in the men’s competition. But with less matches per season it is probably fair that our assessment of the women’s teams should change more quickly.

In my men’s AFL Power Rankings, clubs playing another club from interstate are considered to have a one goal or two goals home ground advantage, depending on the distance travelled by the interstate side. These were roughly based on long-term averages of clubs’ performances at home and interstate.

Since no club has played a match in the actual AFL Women’s competition yet, should I start them all on zero? I say no, as the informed view – reflected in bookmakers’ premiership odds – is that they are not equal.

The starting values will also serve as the initial values for determining the strength of opposition – though some of these may quickly change after a couple of matches are played. See the table below for where I am starting each AFL Women’s club off at. 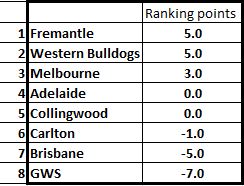 So there you have it: my adjusted Power Rankings system for the AFL Women’s league. Check back every week once the season kicks off to see how the rankings develop. As the teams are largely unknown quantities this should be interesting.

What I've Been Reading